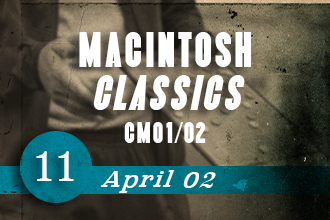 THE MISSION: Return to Championship Manager 01/02 and win silverware with Everton

THE CATCH: Everton are in financial trouble. There will be no Cherno Samba for you.

We all fall down. At some point in our lives, we all fall down. What matters is how we get back up again. Last week, I fell down. But you dragged me back to my feet. Now let’s say no more about it.

First, we must review. Stripping out all the terrible youth players, who would have been released were it not for the fact that small squads cause unhappiness, and removing those who have displeased me beyond redemption, what have we got? 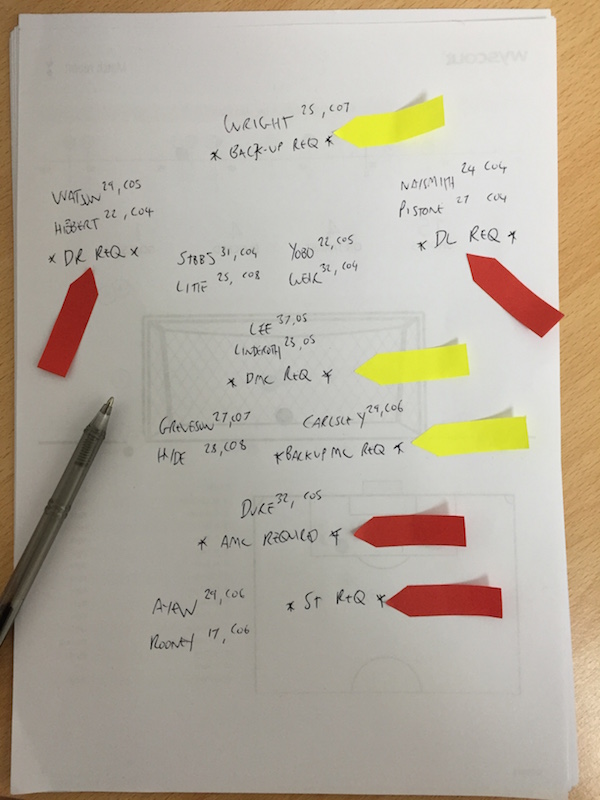 Now, obviously we can’t just go out and buy everyone we need. But the season is almost over. Contracts are expiring across Europe. I dispatch scouts to prepare reports on over 30 players that catch my eye.

We’re £36m in debt and the dramatically reduced capacity of Goodison Park means that it’s now impossible to turn the tide. But because we’re doing well (in relation to our expectations, at least) the board keep leaving £500,000 in the transfer kitty. Presumably, they’ve given up caring. I plunge into the lower leagues to see if I can find anything. Worryingly, even the top goalscorers from the third division are out of my reach. I tell my over-worked scouts to check out the high fliers in the fourth division.

While they’re off doing that, the season continues. With 35 points, we’re probably already safe, but one more win would seal the deal. We may not get it away at Newcastle.

Since taking over from Sir Bobby Robson, Martin O’Neill has brought a new style of football to St James Park. He likes a 3-5-2 with Mark Kerr holding the fort while Mario Stanic creates chances for Alan Shearer and Craig Bellamy. So we’re up against it here.

We’ve seen in the past that there’s no point attempting to match this formation and we know that we need three men in the middle, so we continue with the diamond on account of it being slightly less ruinous than everything else we’ve tried. 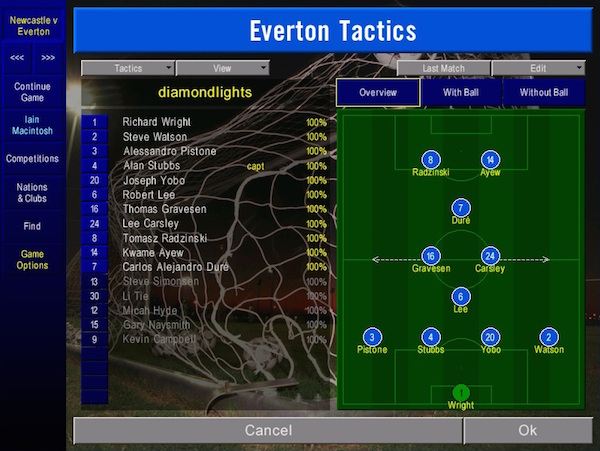 For 10 minutes, it looks as though this might be a memorable day for Everton, rather than another trauma to try to forget. Carlos Dure’s early strike was the reddest of herrings. What followed was brutal.

I can’t fault the players, they tried their best and a late flurry of chances when we were 3-1 down brought encouragement right up until the moment that Alan Shearer smashed home a late penalty to put the game out of sight. 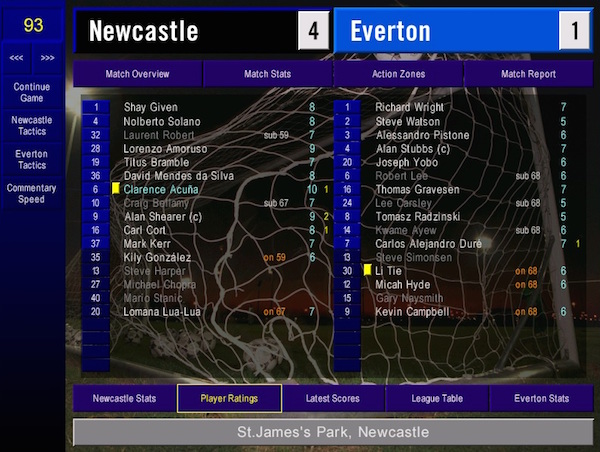 The first pile of scout reports come back, but there’s nothing of note. We could make a move for 35-year-old Paul Merson when his contract expires at Portsmouth, but after the limited impact of Rob Lee this season, veteran collecting may not be a policy worth pursuing. Darren Byfield, top scorer at soon-to-relegated-from-the-second-division Rotherham looks fantastic, but at £1.6m he’s way out of range.

Elsewhere, it’s award season and you have to say that the PFA have made a fine choice this year. We could have had him for a pittance, you know. Stupid financial crisis. 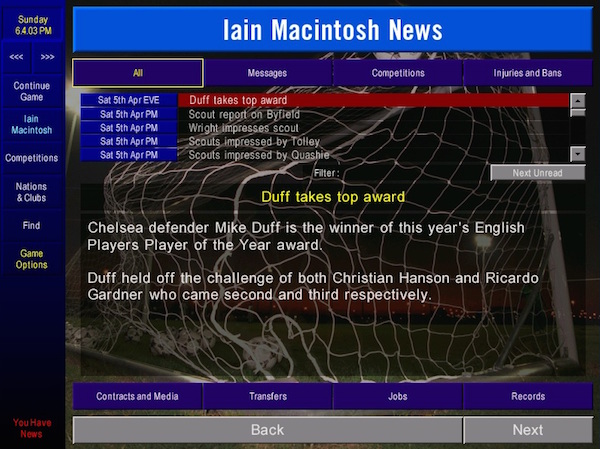 Still no joy from the scouts, but this chap looks interesting. All of his physical attributes are high and you know how we value that at Everton. But is he good enough? Well, he can’t be much worse than what we’ve got. 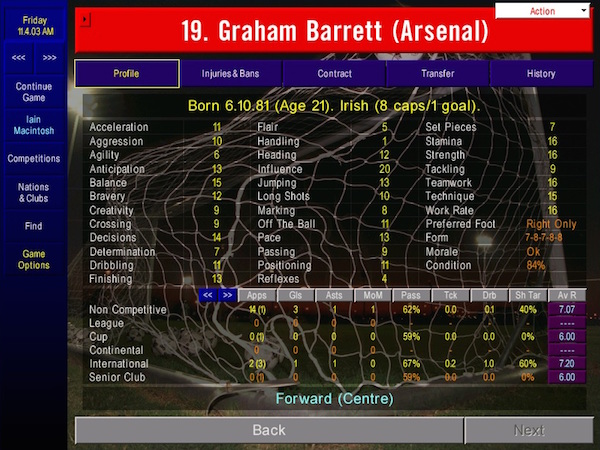 Stats-wise, Barrett doesn’t seem to be a lot better than Nick Chadwick. But that boy can never sustain any form. However, if I’m weighing up a replacement, I may as well give him once last try in case he catches light.

The home tie against West Bromwich Albion is perfect. They’re profoundly average, the sort of level to which we must aspire. Also returning to the team is Tobias Linderoth, who hasn’t been happy for more than a year because of the ‘financial upheaval’. Join the club, mate. Join the club. 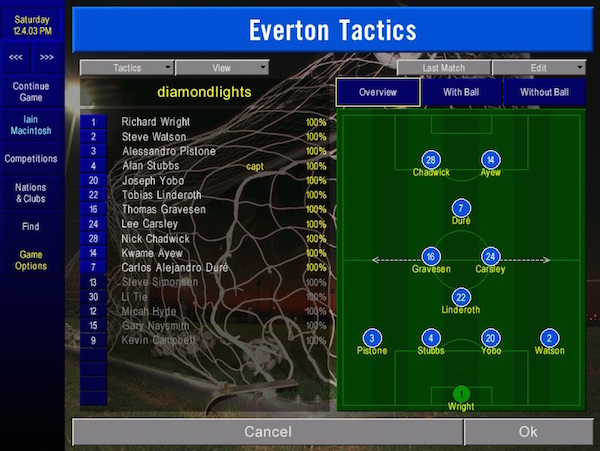 Proper Everton, that. A game of few chances, multiple fouls and nine bookings. That’s our territory. It was never comfortable, but knife fights rarely are. Thomas Gravesen smashed home an opener and Micah Hyde, on for the disappointing Linderoth, scored a winner before, naturally, we let the Baggies back in for a nervous finish.

With five games left and 38 points on the board, we are officially safe. That is not something I expected to celebrate when we finished fourth last season and qualified for the Champions League, but you take what you can get. Fifteenth place feels pretty good right now. 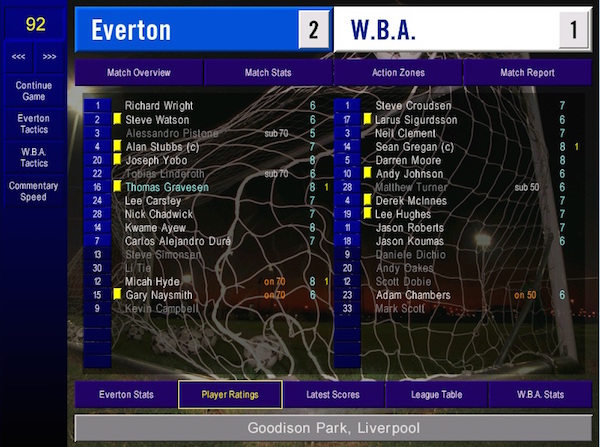 The scout reports continue to land on my desk and this week, a real contender emerges. Federico Magallanes, whose contract is up at Torino, looks far too good for us. We can’t meet the wages he wants, but I offer him everything I have, just in case. 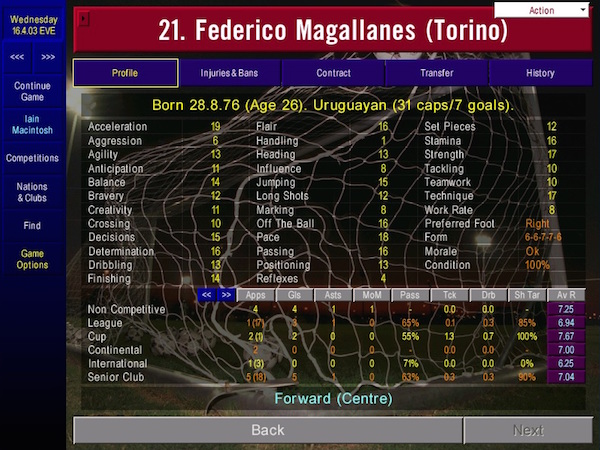 But enough of that. More football awaits, away at Manchester City. I’ve got a soft spot for City, mainly because we’ve beaten them every time we’ve played them and we’ve never conceded a goal. Having failed his big test, Linderoth drops out and is replaced by Li Tie. 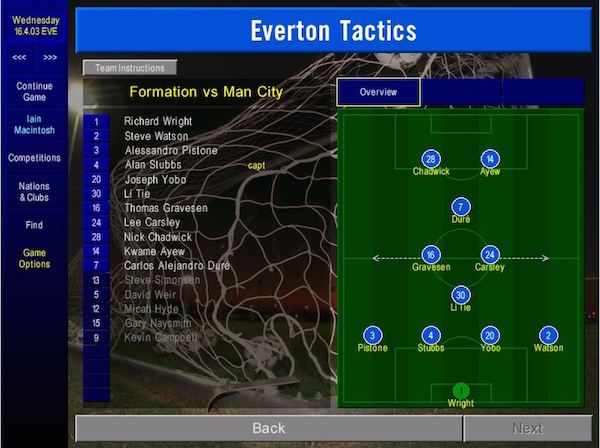 It takes City seven minutes to ruin my eternal clean sheet, but it’s their only shot on target all afternoon. We absolutely batter than for the entire game, but find Peter Schmeichel in indomitable form. Frustrated, I remove the effective Li Tie from the back of the midfield and throw Kevin Campbell up as a third centre forward. We get the equaliser, a fourth goal for Kwame Ayew, but that’s all. We deserved much more out of that. 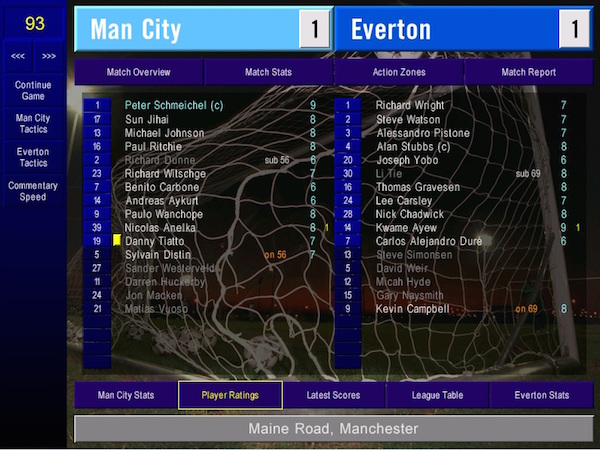 Another hit from the scouts in the form of St Johnstone’s left-back Ross Forsyth. A player like that, with the right coaching, might just prove useful next season. Unless, of course, we’re forced to sell him as soon as someone notices that he can play a bit. 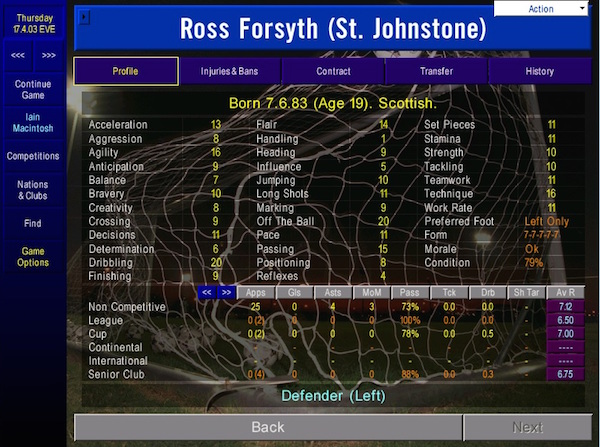 We have never beaten Liverpool. We have never even drawn with Liverpool. This has been a horrible, horrible season, but one victory, one fucking win over those big-spending-but-still-miles-off-Manchester-United red bastards will blow those grey skies away.

I bring Wayne Rooney back from the reserves. I consider bring Duncan Ferguson back too, but his morale is very low and he is quite adamant that he hates me, so maybe that’s going too far. Get at them, you blue dogs of war. 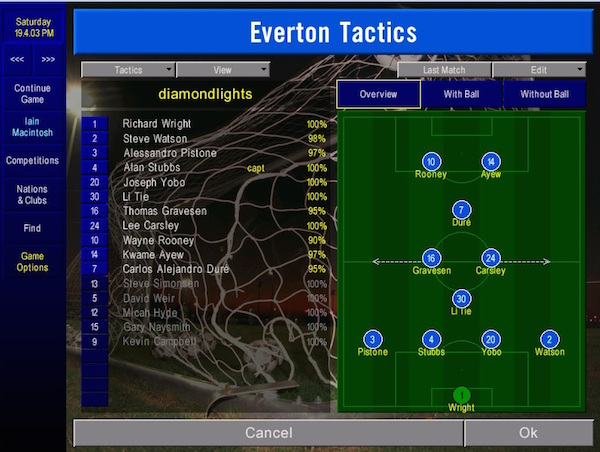 So close. So bloody close. Ayew hit the bar. Gravesen hit the post. We couldn’t have given anything more. They gave it everything, those beautiful blue bastards. Next time. Next time. Still, at least we snuffed out their last chance of winning the league. It’s not all bad. 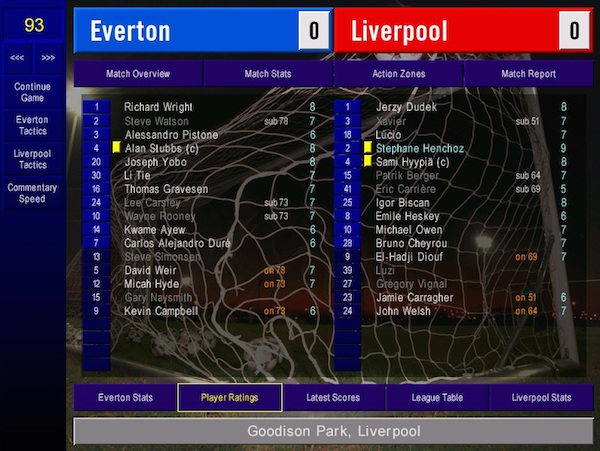 Magallanes says yes. So does Forsyth, but he’s just one for the future. Magallanes is the most exciting talent I’ve signed in two years at the club. Sure, his work rate is low and he doesn’t speak English and he’ll take time to settle and he might just break my heart. But he’s a player. Oh, he’s a player. He could change our stars. 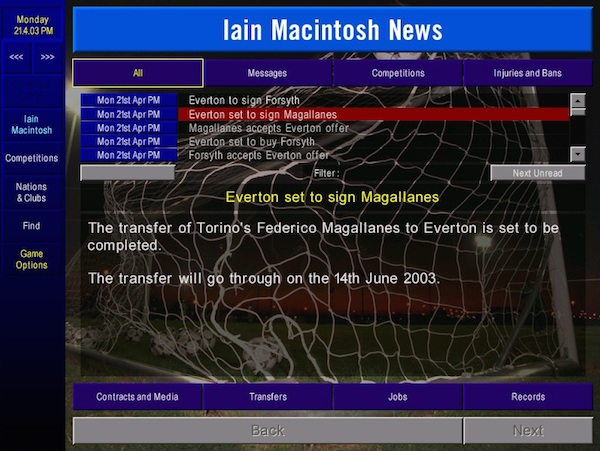 One more game in April and that’s bloody Arsenal, who actually haven’t done as well this season as you might expect. They’re off the pace and are barely hanging onto fourth place. You’d expect better from a team with Patrick Vieira and Thierry Henry, quite frankly. 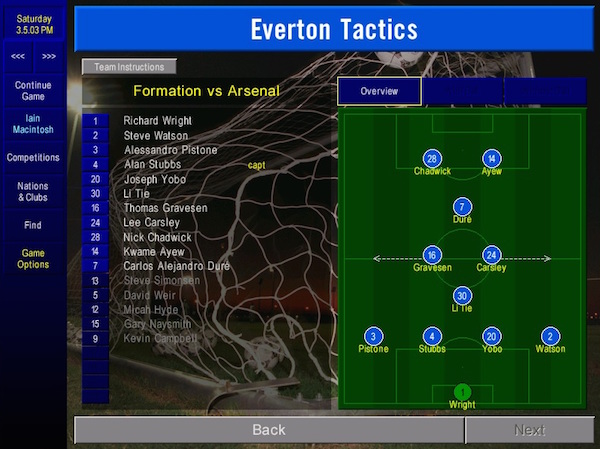 We’re good enough to get a result against Arsenal when they’re off form and we’re on it. We’re definitely not good enough to do it when the roles are reversed. That was rubbish. 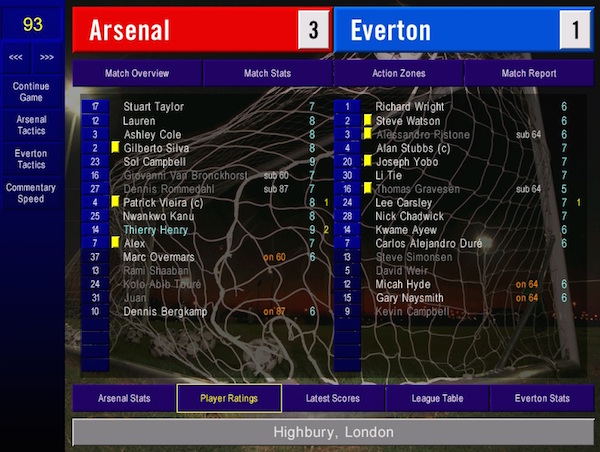 But we’re safe and we’ve got good new players on the way. And the bailiffs too, if these newspaper reports are to be believed. I’m a little surprised that our plight required an expose. Every time I’ve done a press conference in my head, it’s been the only thing I’ve spoken about. But I do like the idea that we have investors who might be placated with the sale of Tony Hibbert. Good luck with that. If Hibbert leaves, I riot. 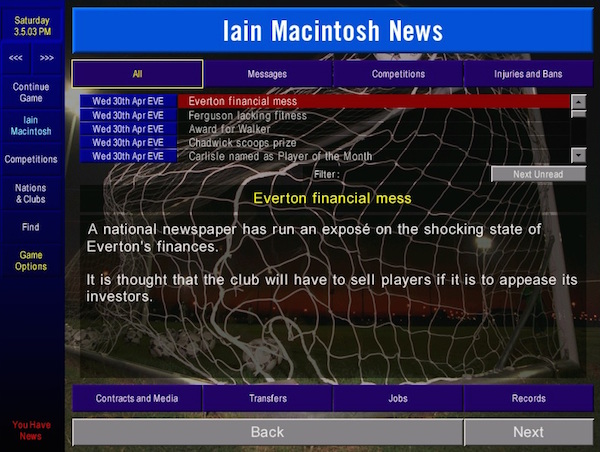 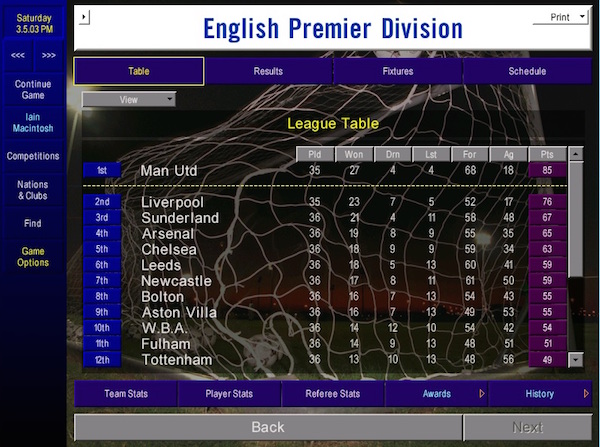 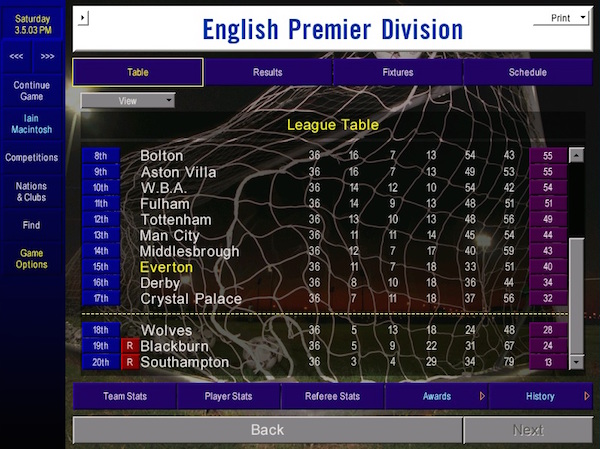 But look at the table. Are we okay? Yeah, we’re okay. We’re still here. Battered and bruised, but not beaten. We fight on. We live on. We will stand tall for the 2003/04 Premier League campaign. We’re luring in better players, we’re working hard behind the scenes. We have renewed hope and confidence. Nothing can bring us down now. 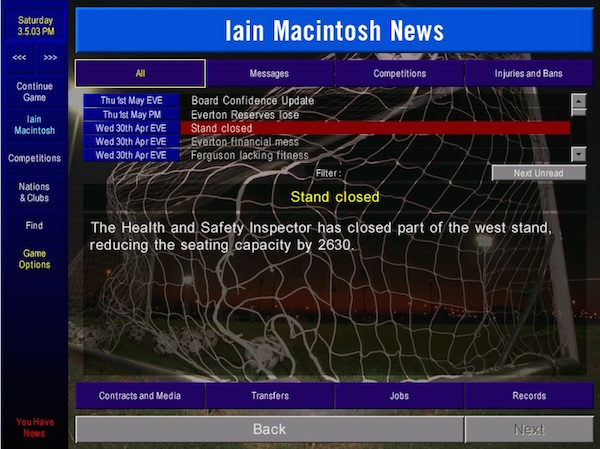 I hate this fucking game.

Championship Manager 2001/02 is freeware. If you want to replicate this challenge, or make one of your own, or even just indulge in some nostalgia, you’ll find all the links you need here. We’re running leagues from England, Spain, Italy, Germany, Holland, France, Portugal and Scotland and we’re using the 3.9.68 patch that uses 02/03 data, but doesn’t crash. Hopefully…

Roy Hodgson is to leave Crystal Palace and retire as a manager at the end of the season. The announcement was made before Wednesday’s game at home to Arsenal, allowing the fans returning to Selhurst Park to pay tribute to the 73-year-old, who has kept Palace in the Premier League since taking over in 2017.

“After more than 45 years of coaching I have decided that the time is right for me to step away from the rigours of top-flight Premier League football, so our final two matches will be my last ones as manager of Crystal Palace,” Hodgson said.

The veteran manager has spent four years in charge of the Eagles, his boyhood club, having took charge in September 2017 following Frank de Boer's short, but dire, tenure